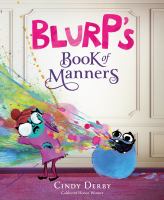 "When etiquette coach Ms. Picklepop teeters off her stool and spills a bucket of paint, a creature emerges. Not a scary one, or an evil one, or anything of the sort. Instead, what comes alive is... BLURP! She'll have to carry on with her lesson, despite Blurp's many, messy distractions. But paint splotches and burps aren't all that disrupt Ms. Picklepop's decorous class. Perhaps through an unlikely friendship, Ms. Picklepop will learn a thing or two about manners herself" --