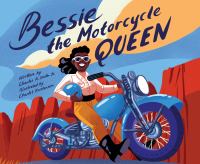 "Hop on the bike with Bessie Stringfield, the motorcycle queen of Miami, in this powerful picture book from Coretta Scott King medalist Charles R. Smith, Jr. and debut picture book illustrator Charlot Kristensen. In 1929, 18-year-old Bessie Stringfield hopped on her motorcycle and headed out on an adventure, an unusual choice for a young Black woman at the time. Paying her way by winning motorcycle races, she criss-crossed the country through small towns, big cities, and wide open spaces. But not everyone was happy to see Bessie's brown face peeking out from underneath her helmet. And more than once, Bessie found herself making some quick exits on the back of her bike to escape Jim Crow. A trailblazer in the world of women's racing and motorcycling, Bessie Stringfield was a figure who will inspire all children to pursue their dreams"--