Both sides of the blade 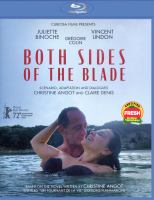 Blu-ray
Scheduled release date: November 15, 2022.
Both Sides of the Blade tells the tale of a passionate live triangle. Jean and Sara have been living together for 10 years. When they first met, Sara was living with François, Jean’s best friend and an admirer from back when he played rugby. Jean and Sara love each other. One day, Sara sees François in the street. He does not notice her, but she is overtaken by the sensation that her life could suddenly change. François gets back in touch with Jean. For the first time in years. He suggests they start working together again. From here on, things spiral out of control.