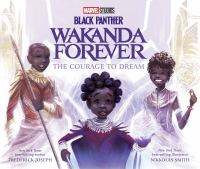 "The Courage to Dream tells the story of Assata, a young Wakandan who hopes to become one of the Dora Milaje, the warriors who protect Wakanda. But because of Assata's disability, she lets go of her dream. Assata's light shows through all the same, introducing her to surprising friends: the princess Shuri, the warrior Okoye, and the powerful M'Baku. But only Assata can give herself what she's missing: the courage to dream."--