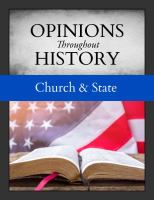 Book
The United States of America was founded by Christians who brought this European religion to the New World and used their spiritual doctrines as a guide when crafting the founding nation's laws and traditions. However, from the beginning, it was recognized that a truly democratic society needed to accommodate a range of spiritual attitudes and ideas. This volume of Opinions Throughout History looks at how the idea of religion evolved in public and political life in America, and traces the history of efforts to both separate and integrate religion and politics. Topics covered include parochial schools and the federal funding debate, the debate over censorship, abortion access, and religious prejudice.