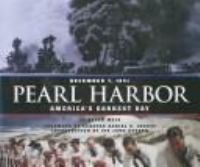 Unlike any other book, Pearl Harbor brings together in one magnificent edition the rich history, real-life stories, harrowing drama, and appalling tragedy of the Japanese attack on the United States' premier Pacific naval base. With a foreword by Senator Daniel K. Inouye and an introduction by preeminent military historian Sir John Keegan, Pearl Harbor imparts the rich historical background of the initial days of the Second World War, the dramatic events of the attack, and the enduring legacy of this wartime disaster. Pearl Harbor features over 200 archival photographs from American and Japanese sources, previously unpublished artifacts, military art rendered from eye-witness accounts of the attack, and full-color battle maps and diagrams.