My name is Bana 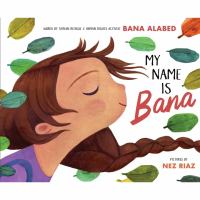 A poignant picture book memoir from Bana Alabed, the seven-year-old Syrian girl from Aleppo whose messages to the world have turned her into a global symbol and advocate for refugee rights. "I just want to live without fear." -Bana Alabed, Twitter, October 12, 2016 When seven-year-old Bana Alabed took to Twitter to describe the horrors she and her family were experiencing in war-torn Syria, her heartrending messages touched the world and gave a voice to millions of innocent children. Written in Bana's own words, this picture book offers a uniquely intimate child's perspective on one of the biggest humanitarian crises in history. Bana has lost her best friend, her school, her home, and her homeland. But she has not lost her hope-for herself and for other children around the world who are victims and refugees of war and deserve better lives.