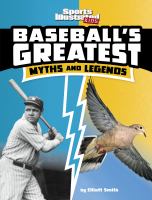 Book
"Did a major-league pitcher really hit a bird with a fastball in the middle of a game? What did a goat have to do with the Chicago Cubs not winning a championship for more than 70 years? Did Babe Ruth really point toward center field just before hitting a big home run in the 1932 World Series? Prepare to uncover the real stories behind these and other great baseball myths and legends!"--