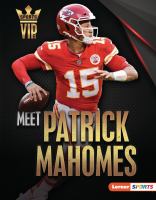 Book
"Quarterback Patrick Mahomes led the Kansas City Chiefs to Super Bowl victory in 2020. That year, he signed a record-breaking contract with the team. Learn about the superstar's life on and off the field"--