Black ships before Troy : the story of the Iliad 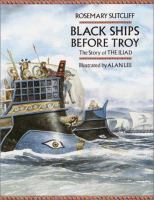 Book
Retells the story of the Trojan War, from the quarrel for the golden apple, and the flight of Helen with Paris, to the destruction of Troy.