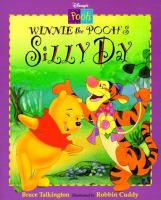 Book
Pooh bear, who has been searching for the April Fool, discovers that it is at Rabbit's house where the gang has benn waiting for his arrival.