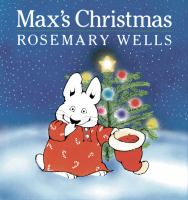 Book
Despite his sister Ruby's admonitions, Max waits up on Christmas Eve to see Santa Claus coming down the chimney.