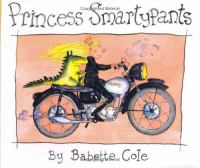 Book
Not wishing to marry any of her royal suitors, Princess Smartypants devises difficult tasks at which they all fail, until the multitalented Prince Swashbuckle appears.