In the time of knights : the real-life story of history's greatest knight 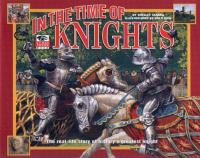 Book
Follows the career of medieval knight William Marshal from his rigorous training to his tournaments and Crusade battles, and provides information on weaponry, castle life, and the political and religious background of his era.