Winnie the Pooh's a to z 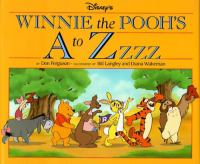 Book
Brief rhymes featuring Winnie the Pooh and his friends introduce each letter of the alphabet.